Whether you're looking for shopping rewards, travel bonuses, or simply low rates - we've got you covered. 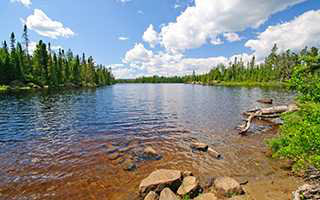 Rooted in our community.

Woodland Bank is a family owned bank that traces its roots back to the logging boom days in Northern Minnesota.  The bank was chartered in 1920 as Shovel Lake State Bank by Fred Blais to serve the needs of his logging camp and area community of Shovel Lake, Minnesota.  In 1924, the bank acquired and merged with the First State Bank of Swatara, another local logging area owned by the Magnuson family from Foley, Minnesota. It was at this time that Gotfred Nicklason came to work for the bank as a Cashier. He had previously worked as a “walking boss” for the Fred Blais logging operation.

After the banking holiday during the Great Depression, ownership decided to move the bank to Remer, Minnesota when a bank closed in Remer. Remer had a railroad depot and since the logging operations were starting to run out of wood, it made sense to make this move. The bank became Security State Bank of Remer in 1934.

The Depression was a tumultuous time for all banks but Security State Bank survived despite a few robberies and a tough economy. It was during the 30’s and 40’s that Gotfred Nicklason acquired enough stock to control the bank. He continued to run the bank until bad health led him to retire in 1956. It was at this time that Robert Nicklason was recruited to work at the bank to support his father. Robert Nicklason became President in 1966.

The bank began their branching era in 1978 with the first branch in Longville, Minnesota. In 1991, current President Brian Nicklason returned home to assist his ailing father. In 1993 Security State Bank changed its name to Woodland Bank to reflect its logging history and branch strategy. In 1993 Woodland Bank opened an office in Cohasset, Minnesota. It continued its branching strategy with a branch in Hill City, Minnesota and subsequently in Jenkins and Deer River. A Loan Production Office was added in Grand Rapids in 2009.

A Renewed Focus and Commitment

In 2012 Woodland Bank agreed to sell the Remer, Longville and Jenkins offices to the First National Bank of Walker. Woodland Bank will now center its focus on the Itasca County area of Minnesota. It remains committed to serving the needs of its communities and the vibrant economy in the Grand Rapids, Minnesota market. In September of 2015 the Loan Production Office in Grand Rapids was converted to a full service branch to better serve its community.